I have entered the Moran Prize for portraiture (not to be confused with the Moron Prize for thinking penguins are fish). The Doug Moran National Prize for Portraiture is an annual competition for portraits of Australians by Australian Artists. Last years winner was a portrait by Vincent Fantauzzo of Baz Luhrmann trying to pull his eyeballs out.

I entered the two final portraits of Dave Collins with a few alterations. With the two works next to each other, both with vast white backgrounds, I decided that it may appear to be two versions of the same work so I went full-coldplay on one artwork and repainted the background yellow. I like how the image still retains a dark mood with such a vibrant colour dominating the work.

Entries close on the 21st of May and the winners are announced on the 17th of July. Also the Prize money is $150,000. That’s more than gameshow money! I could renovate a house and lose 70kgs after making a flan so good Delta Goodrem will tell me I’m “what this competition is all about” AND STILL…STILL I would win more money than gameshow money.

So once again I am very proud of my portraits of Dave and it’s a real luxury to be able to submit both works in to the competition. Stay tuned. Hopefully I wont have to photograph myself crying in the shower again. 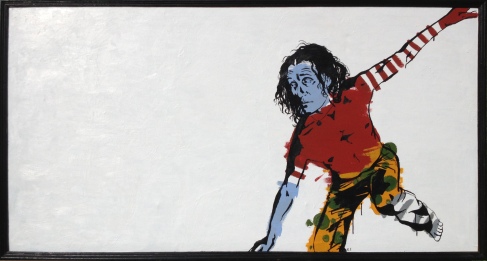