I moved in to Sydney’s Inner West about a year and a half ago. Driving around the area I noticed the large amount of graffiti and local activism. I felt like I should be a part of the community and take part in both. My contribution ended up not quite being activism or graffiti and was hung on a local corner that seemed to be the main noticeboard in St Peters just down the hill from May Lane which is Sydney’s most notorious street art hotspot. My banner remained untouched for quite a while and my excessive use of cable-ties and weather proof materials like enamel on vinyl meant it was protected against the elephants. 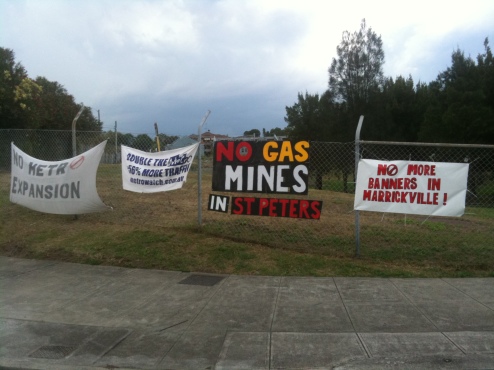 As the NSW state election crept closer my banner, which was a great example of antidisestablishmentarianism, was converted into a political poster when someone grabbed a blue marker and crossed out “banners” and wrote “Labor”in it’s place. I discovered this at about 10pm so I soaked a rag in solvent to rub away the ink. But all this did was create a big blue cloud so I returned at midnight with a can of white spray paint to spray over the big blue mess I had made earlier. As I was halfway through spraying over the blemish on the banner a police car pulls up next to me and I act like I don’t see them so I can finish cleaning up the artwork.

LOVELY POLICE MAN: What are you doing here mate.

ME: (Small poops filling my undies. Trying to stay cool) I put up this banner earlier and some one graffiti-ed it.

LOVELY POLICE MAN: Do you know it’s illegal to carry a spray can in NSW?

LOVELY POLICE MAN: Were you intending on graffitiing anything?

ME: No I just came down here to fix my banner. I thought it was okay to put a banner up here. I mean I saw these onesandthoughtitwasOK?

LOVELY POLICE MAN: What’s it about?

Meanwhile Lovely Policeman NO. 2 Is taking down my details after I gave him every piece of identification I own. He is constantly on his radio. I press my heel in to the ground to stop my knee shaking.

ME: I ah, saw a bunch of banners up in the area and thought they looked ugly so I guess mine is kind of a protest.

LOVELY POLICE MAN: Are you planning a march?

ME:(Oh gosh stop trying to justify it) It’s more of a joke really. But I though the banner was okay. I mean I see them everywhere and-

LOVELY POLICE MAN: The banner is fine. We are just trying to crack down on graffiti in the area. So we saw you with the can and pulled over.

ME: Yeah I’ve noticed. Some one defaced my protest-banner earlier. I tried to rub it away with solvent but but I just created this big blue cloud I think that spray paint would have been the easiest way to cover it up I would have taken it home butIusedtoomanycable-tiesandit’sreallyhardtotakeoff.

LOVELY POLICE MAN: Alright. Look don’t carry that spray can with you.

Lovely Police Man No. 2 hands back my wad of identification.

ME: Am I in trouble?

LOVELY POLICE MAN: No, you just can’t carry that spray can around as it’s an offence. Now ride home and be safe.

ME: Thanks guys. Sorry about that. ‘Night.

I then ride home on my push-bike with my flashing lights on and day-glow vest sipped up. It probably didn’t help that I was wearing black pants and a black hoodie that night in order to feel more bad-ass. I then went home, threw away my undies and curled up in a ball because I was caught doing something not quite illegal and received no penalty. WHAT A RUSH!

BUT NOW! Now I’m a regular street-art fiend. I went out last night for three hours with a couple of real bad dudes and we coated some walls man. We sprayed up some serious deviant art all over the completely legal designated graffiti art tunnel at Sydney University which we did after hours as so we didn’t disturb the students. I may have also had a friend carry the cans there because I DON’T WANT TO BE A FELON. I WOULDN’T DO WELL IN PRISON – I GET NERVOUS PEEING IN FRONT OF OTHERS.

Here are just some of the artworks I made that night. 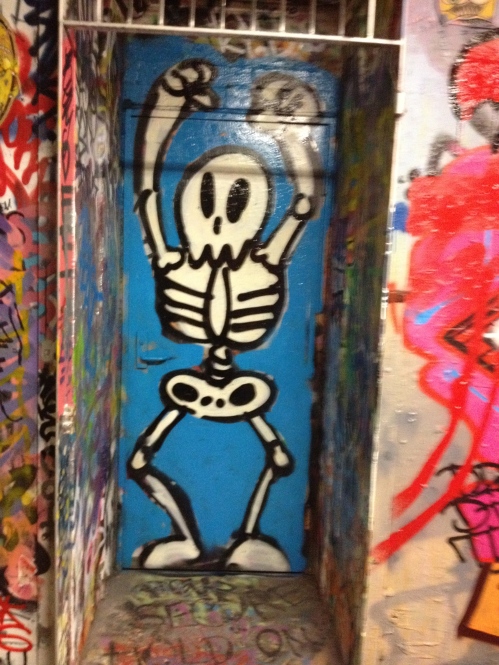